The Broken Heartbreakers and a sweet giveaway 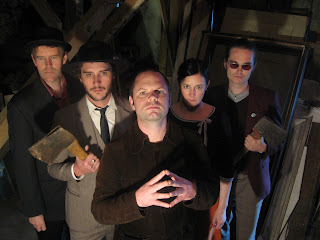 For the past few years, I've been playing space mandolin and dark, tremulous guitar (See what I did there?) with The Broken Heartbreakers.  It's been a blast.  Then I turned my back for five minutes, and half the band ran away to parts unknown, so we're having a little break at the moment.  It turned out, though, that in a classic case of how you never really know what drummers are up to back there, our drummer Myles had been quietly shooting really grainy footage and taking low-resolution photos of us (mostly of our backs)  for the duration.  Earlier in the year, in the moments when his new baby daughter was asleep, he edited it together into a sweet little video to go with the title track of our new album 'Wintersun.'  For reasons best known to himself, he decided to use a version of the track that is actually quite different to the one that ended up on the record, in that half the vocals are missing and the guitars in the bridge kind of sound like Supergrass.  Such nitpickerry notwithstanding, the results of his efforts warmed my heart when they emerged from the internet into the Berlin apartment where I was sitting listening to the rain and missing my band a couple of months ago.

I don't think this is the kind of video that will ever get played on the television, partly because it's just too awesome, and also because it actually doesn't get any bigger than the little window here.  Also, the section between 2:43 and 2:46 features rare footage of the only time Rachel has been know to lose a game of pool, so it's kind of embargoed.  So for now, this is an exclusive, which is sure to boost my traffic and help me to monetize my blog.

I'm kind of interested to hear whether other people enjoy this video quite as much as I do.  I mean, for me it's memories of touring with a good people for the past couple of years playing awesome music; to you it may look like a bunch of grown-ups failing to act their age.  Perhaps it's the same thing.  Anyway, since the Broken Heartbreakers usually appeal to a more sensible and mature demographic (as well as our hordes of teenage fans who were devastated when it was revealed that John was actually married to Rachel and hence unavailable), here's a video of us being accepted by the cultural establishment:

Yep, that's Finlay MacDonald there, who edited the NZ Listener last time it was a good magazine.  If that's not cultural establishment, I quit.

Why am I telling you this?  I thought you might want to get a copy of the newish Broken Heartbreakers album, is why.  Ms Millicent Crow has been telling me that I should do a giveaway on my blog for quite a while, because that's what people with blogs do, apparently.  So here goes: What you have to do is leave a comment below telling me your favorite thing about the 'Wintersun' video, and sometime before Thursday I'll choose a winner.  I will probably do some sort of names in hats or random number generator type procedure in order to ensure fairness, or perhaps I will get the cat to choose.  The winner will receive this princely prize pack:

One 'Wintersun' CD, to be posted anywhere in the world or to the Mars colony, and
Two free passes to any of the the shows I'm doing with John White over the next couple of weeks.  If you're not in Wellington, Whanganui, Raglan, or Auckland, these are transferable, so you can nominate two people in one of these towns to get in for free.  I probably can't give away free passes to the South Island shows because I'm not playing at those ones, but I'll check with John and get back to you.  Similarly, if you already have a copy of 'Wintersun,' because chances are if you read this blog you're either a friend or a relation and you got it at one of the release shows, take the free one and give the one you already have to your aunty for Christmas.  If you are a relation, though, please don't give it to one of the aunties we have in common because then she'll get two.

UPDATE:  It was drawn to my attention that I had set my settings such that you needed to do stuff like sign in to leave comments, which a lot of people find quite difficult apparently.  This blogging thing is clearly more complicated than I had anticipated.  Anyway, I've changed it now, so everybody can comment, even spambots.

Spambots: Even if you win the competition, you can't come to the show.  Sorry. 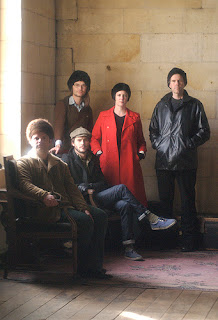 The Brokem Heartbreakers will see you now.
Posted by Bond Street Bridge at 2:38 PM