The Explorers Club: Antarctica is an award-winning live performance in story and song telling the tales of Capatin Scott, Ernest Shackleton and the Heroic Age of Antarctic exploration.  Written by Sam Prebble, performed by Bond Street Bridge and featuring original illustrations by Emily Cater.﻿  Touring constantly, album available now on Banished From The Universe Records.

'It is a rare thing to come away from a concert feeling that you have been taken physically to another place and have to struggle to find your way back to the familiar. Such is the genius and commitment of singer/songwriter Sam Prebble and fellow musicians Nina McSweeney (vocals) and Brendan Turner (bass guitar/vocals) and the performance they gave... a tour de force.' the Nelson Mail


'Beautiful, sad and utterly mesmerising. You will go away a richer person for having seen this.'  Gather and Hunt.co.nz

'Stunning... a performance to make hairs stand up on the back of your neck' Whanganui Chronicle

'This was a rollicking show. Wonderful tunes and excellent visuals created a night of entertaining pathos.  There was something for everyone no matter how much or how little they knew of the icy continent and its history.' Te Radar

'These spare, quiet songs cut to the quick' 4.5 star review, Graham Reid in the NZ Herald


'A delicate warmth and an assured touch... an ambitious musical landscape.' 4 star review, Shane Gilchirst in the Otago Daily Times 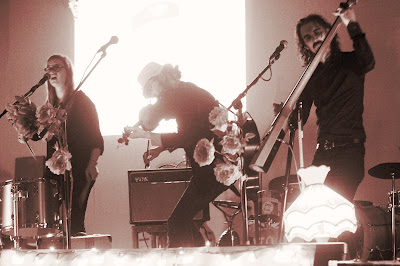 Following an epic year of sold-out shows and rave reviews, Auckland alt-folksters Bond Street Bridge continue to melt hearts as they weave their stories of icy adventure and Edwardian courage.

In The Explorers Club: Antarctica, Bond Street Bridge use a combination of spoken word storytelling, original folk songs, and multimedia projections of heritage images to bring to life the incredible tales of the Heroic Age of Antarctic Exploration.  Captain Scott’s tragic death on the Great Ice Barrier and the extraordinary survival of the crew of Shackleton’s Endurance are presented as stirring ballads, heartbreaking elegies and foot-stomping sea shanties.

Since its premier in the 2013 New Zealand Fringe Festival, the show and accompanying album have garnered critical acclaim and played to sold-out houses at Arts Festivals, theatres, museums and bar-rooms around the country.  Bond Street Bridge tour and play constantly, with over 100 shows on the road in 2013, with their extraordinary live show earning them recognition for ‘best music’ at the 2013 NZ Fringe Festival Awards.  Described as a ‘perfect evening of music’ by the Dominion Post and a ‘Tour de Force’ by the Nelson Mail, ‘The Explorers Club: Antarctica’ showcases a unique band at the height of its powers.

This one-of-a-kind show and album are the product of Bond Street Bridge frontman Sam Prebble’s obsession with the stories and heroes of a dramatic period of history a century ago.  Reading diaries, letters, and published accounts of the early Antarctic expeditions, Prebble used the words of the explorers themselves to create songs which pay tribute to their legacy and celebrate the indomitable spirit of this lost age.

‘We think of these as folk stories in the same sense as folk songs’ says Prebble. ‘One of the reasons we drive all over the place sharing these stories is that they are tales that belong to everyone, and tales need to be kept alive by being told.’

The band’s live reputation saw them invited to showcase the production at a string of sold-out gala events at galleries, museums and arts festivals around the country on their 2013 album release tour, including appearances at the Museum of Wellington City & Sea, the Voyager NZ Maritime Museum in Auckland, the Sarjeant Gallery in Whanganui, the MTG Hawkes Bay and the Nelson, Queenstown and Taranaki Arts Festivals.

In early 2014, the band were invited to open for Billy Bragg on his New Zealand tour at the sold-out Opera House in Wellington and the Powerstation in Auckland.  In September they will be taking their show to the Sydney and Melbourne Fringe Festivals and touring new work around NZ.  They are currently working on a follow-up show set to premier in a number of NZ festivals in 2015.

Tues Oct 22: MILFORD SOUND Throwdown in the Sound at Blue Duck Cafe And Bar,  with Bat Country
Free if you're in Milford Sound

Fri Oct 25: DUNEDIN, Platos with The Eastern and Barry Saunders
tickets from www.undertheradar.co.nz