I just watched the video for the 'the letting go' from the Eastern's new double album Hope and Wire, and I don't mind who knows that I sat on my bed on on a sunny morning in Auckland City and cried like an orphaned baby seal. What a sad-sack, I guess, but I'm normally way tougher than this so don't worry about me.  It's just, you know, theres a lot going on on this album they've made here.  A lot more than you get in a lot of albums from a lot of bands: a lot more hope for one thing and also a lot more wire. Hope and wire - I couldn't think of a better line to capture the feeling of Christchurch since the earthquake, and I can't think of a better band than the Eastern to put it on a record.


I've seen this hope and wire in the past year. Playing music around the country I've been through Christchurch for shows a few times since the quake, throwing myself every time on the unstinting hospitality of the Eastern Family, the way we have done for years. In June I was travelling with the Teacaddies and we were booked at the Wunderbar. That was one of the very few venues that was operating at the time, having just reopened after the first quake knocked out the stairs back in September of 2010. Then the June 2011 shake happened and the place closed up again, so we needed somewhere to play. Not the biggest or most important problem by any means in a city of problems, but Adam and Jess got on the case, and I got my first taste of hope and wire in post-quake Lyttelton.  We played at a jury-rigged weekly club night at the Naval Point Yacht Club hosted by Al Park of the red-stickered Al's Bar, with an ancient PA, Axminster carpet on the floor and a roomful of people happy that things were happening, that there was a place to go in a town in ruins. We went back to Eastern HQ that night with some guitars and we heard the songs they'd been writing, heard about all the street-corner and backyard shows they'd been playing since February, keeping the music going and spirits up. That was hope.

A couple of months later I came through with Luckless and we played a live to air on RDU. I'd been hearing about how they'd come through the early part of the year badly, they'd lost their studio on the University campus and they were broadcasting out of a van of some kind.  What I hadn't heard was that the van they were broadcasting out of was actually the bastard child of Barbarella's deep space love capsule and a Mad Max war truck, as imagined by Heath Robinson after a solid morning in front of a bottle of absinthe - basically the best vehicle of any kind that I saw in all of 2011.  Imagine this: It's a horse float.  It's got a perspex bubble in the roof like the tank that Tintin drove on the moon. It's got a generator and all the switches, knobs, dials and oscillators you need to run a fully-functioning radio station. The inside walls are lined with astroturf. And! The side wall folds down into a stage, so you can set up a band anywhere you want, and broadcast the performance live.  We rolled up to the show at C4 Coffee company on the edge of the red zone in Tuam street to find them set up and ready to go, Gabe the programme director grinning from ear to ear with dreadlocks all the way down his back.

'We've got a sweet signal,' he said. 'I climbed up the back of the building with the antenna cable and tied it to the downspout.  Direct line of sight to the repeater on the Port Hills.'  That was wire. 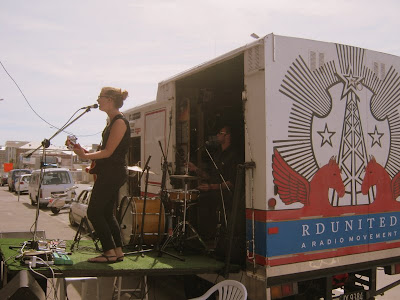 Ivy and Will rocking the RDUnit: Note the astroturf.

I can't think of Christchurch without thinking about The Eastern.  They're a touring band, they work harder probably than any other group in the country and they're on the road a lot.  As much as they're away, though, they're a local band. Their songs, their artwork, the way they operate, they're all about Christchurch and they're especially all about Lyttelton Harbour.  Jess Shanks writes about being a Southern Girl, Adam writes about the harbour lights and the bars on London Street.  There are pictures of the Port Hills on their album covers, and before the quake they could be found any night of the week playing in bars around town because that's their job. Like a lot of bands, we get help from the Eastern every time we come through Christchurch, and that night they were putting us up at this house they were recording at, in Dallington.  We had a late show at the Brewery and we'd been up at all hours in Oamaru the night before when we managed to lock ourselves out of our accommodation at four am, so everyone was a little wired and shaky as we followed Adam's directions from Tuam street.

Dallington was fucked. Christchurch locals have got used to lumpy roads apparently, but to an out-of towner it's very disconcerting driving on tarmac rumpled like a quilt and full of holes. Crossing the Avon on a twisted bridge, we could see that this part of town was mostly abandoned. The verges were overgrown, the driveways were blooming with poppies, it was spring time and there was nobody mowing the lawns. Rooflines sagged and windows were empty; it felt creepy peering into people's deserted living rooms so after a couple we stopped looking.  At what we thought might be the right letterbox we killed the engine and looked around, listened to the quiet. This was clearly not the right place, couldn’t be. Nobody lived here. This was Poland, this was East Berlin, this was an abandoned suburb in the second-biggest town in New Zealand. We were not ready for this, nobody was ready for this. These directions, we thought, must be wrong. Some tension in the car, cracks. Sobering. Depressing, even. Then we heard a guitar, laughter, people, a dog. We piled inside and there were amps and a drumkit, cables and mics, preamps everywhere, lyric sheets stuck up on the wall and guitars on every surface, they had the electricity going and there was beer in the fridge. In an abandoned house, in a suburb full of abandoned houses waiting for insurance companies to come and tear them town, The Eastern were making a record. Hope. 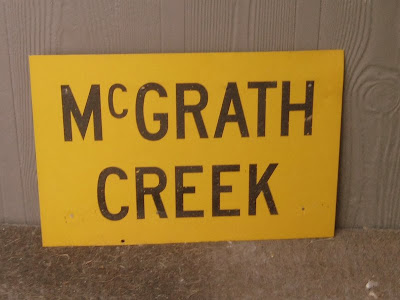 Sign on the wall at the recording house. Adam has also taken to carving his
name into the floors of venues with a knife, I am told.
A month or so later I came back through with the Broken Heartbreakers and we stayed at the recording house again.  The whiteboard on the wall showed that the album was nearly ready, ticks in most of the boxes. There had been a couple more shakes in the meantime and the driveway was covered with fine liquefaction dust that got in your mouth when the wind blew.  The house had settled a bit and some of the doors that opened last time were jammed shut now, but it felt like a place where a good thing was happening.  I asked Adam to play me some of the tracks.  'You can wait,' he said.  Fair enough.

We were playing at the Brewery again that night, but thanks to Carmel from Volcano Radio we had an afternoon gig as well, at the Lyttelton Petenque Club.  Some years back me and Emily had stayed in a well turned-out hostel on London Street, an Art Deco place that wore its age well and kept clean rooms.  It's dust now, a pile of gravel. The corner where it stood isn't empty, though - the gap has been filled by the open-air headquarters of the raggedy rough and ready Lyttelton Petenque Club, because really, can you think of a better use for a gravelly lot?  There's a community garden there too, and people selling coffee and markets once a week: a place to go amongst the ruins, see the neighbours, chuck rocks about.  We set up our PA in the corner of the dusty lot and played our set, got a sunburn. People were hanging out, smiling, filling the gap. For the rest of the tour all of our gear and our cables were covered with dust and we didn't mind. Hope and wire.

Listening to the new album this morning I could hear all of this and so much more. So much more – these guys live there after all and I just blow through sometimes. I’ve got some anecdotes, they’ve got a year of dust and rubble, friends killed and maimed, confusion, uncertainty, hope and wire. They put all of that into this record I think. The video made me cry though (not as in ‘brought a tear to my eye’ or anything so restrained, I’m talking about crying, Roy Orbison-style: no control, great choking sobs and tears rolling onto my laptop) it made me cry because before all this happened, I walked in those hills with that exact dog, I played in those bars with my friends, I rode the ferry to Diamond Harbour and looked back at the Timeball Station above the port, I woke up to the valleys around the harbour white with snow on a morning in August. I love that town and the ruins break my heart. Lyttelton isn’t my place, but it’s a place I love, and The Eastern have made the album that Lyttelton deserves. 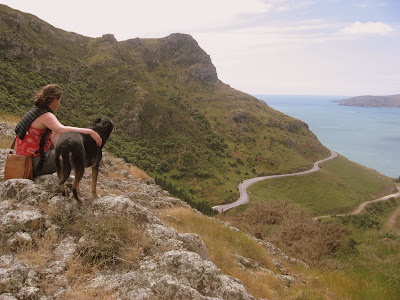 Millicent Crow with Shank's dog Banjo above Lyttelton Harbour in 2009.
Posted by Bond Street Bridge at 10:42 AM 6 comments: