Things fall apart, and I grow an extra finger, probably.

I mean, you pretty much expect things like mandolin strings to get old and break, and the coronation china won't always be there. Parts are going to fall off your instruments. Inevitably, you will do something dumb and somehow end up with your cello spike lost inside the instrument, clattering around ominously. It's not a massive surprise either when you buy a car off a guy for a sweet deal and it starts spraying manky orange water all over the windscreen just as you head out onto the desert road, and the engine begins to rattle and clank like when you've run over too many cops in Grand Theft Auto. It was pretty annoying, though, when the actual screen on my laptop stopped working, and I realised that without those glowing, flickering images, it gets a lot harder to figure out what I'm supposed to be doing here anyhow.

Mostly at the moment I spend all my days staring at .wav files on my laptop screen and playing the same thing over and over again into a microphone, which is to say I am really pretty much quite close to being about to nearly finish, almost, my next album. That's pretty exciting, but really for that kind of thing you need a computer with a screen that works. I mean, I do, anyway. I'm sure that in the olden days people didn't need laptops to make their pretty little folk-pop records, but I find that my productivity is vastly increased by being able to stop what I'm supposed to be doing every ten minutes or so and click through to see if anybody has put any more awesome pictures of cats on the internet. How Nick Drake ever got anything done in the days before memes I frankly do not understand.

So I had to take it to the doctor, the laptop, which meant leaving the house anyway, so I figured that I might as well just make a day of it and get heaps of stuff fixed.  That car I mentioned is long gone now - it lives in Turangi growing geraniums - but things like the cello could be taken care of by my grinning instrument repair guy over on Dominion Road, and I passed a happy couple of hours in various hardware stores discovering that the sort of screws I needed to fix the pickup on my mandolin are not really available outside of the Soviet bloc: absent a time machine and a whole lot of extra visas on my passport, I was going to have to improvise.  So I did, and the mandolin is now as good as ever it was.  I still had time to kill though, so I though I might as well go see a doctor about this extra finger I seem to be growing.

'You're not growing an extra finger.'

'Are you sure?  I mean, I've been playing all these David Rawlings songs and I though maybe the fingerpicking might require more digit -'

'No.'  The thing on the wall said that she got her Doctor degree from the University of Ceylon, so my vague grasp of geopolitical history told me that she'd been doctoring for longer that I've been alive to date.  She probably knows a thing or two about a thing or two, I thought.

'Well I mean what do you reckon it is?'

'The lump? It's likely to be bit of bone. Perhaps.'

'But all my bones seem to be in the right place, broadly speaking. Are you saying I have extra bones? Isn't it more likely to be some sort of tracking device, perhaps implanted by either aliens, shadowy government agencies, or some sinister alliance of the two?'

'Sometimes you just get extra bits of bone. I'll order an x-ray and we'll have a look.'

So that was that, and I think the takeaway from that conversation is as follows:

1) It's not impossible that I have an alien transmitting device implanted in my hand,
2) I probably actually am growing an extra finger, and she just said that I wasn't because she's jealous, and
3) I get to go to hospital and have an x-ray, which is pretty freakin' awesome, because x-rays are totally amazing if you think about it.

So basically, it's all upside.  With any luck, if this exra finger thing works out, I'll be as handsome as this fellow. 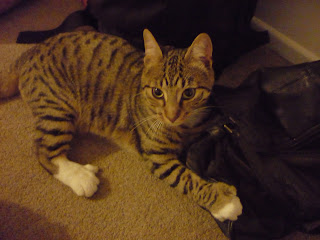 When a cat has extra fingers, it's called a 'polydactyl' and I'm totally not lying about this.
The cat pictured above lives in Paekakariki and he's a little bit clumsy. 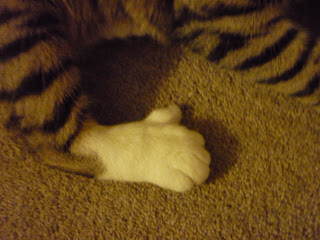